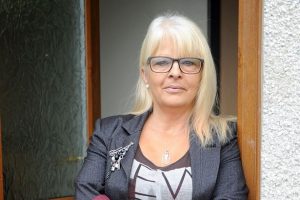 The story of a galaxy far far away is happening for almost over four decades and has many characters in it. One of them – Ewoks that are recognized by every Star Wars fan. They were a diminutive species of furry bipeds that helped Rebel Allience to defeat Galactic Empire at the Battle of Endor. One of these little creatures were brought to life by an actress Pamela Betts.

Pamela starred as an Ewok in the third movie of original trilogy „Star Wars: Return of the Jedi“ that aire din 1983. At that time Pamela was 21 years old and being around 1,4 meters tall was a perfect fit to become this character. For her role she received 500 pounds per week and the whole filming works took five weeks to finish. Up until this day she remembers how hot it was inside the suit. 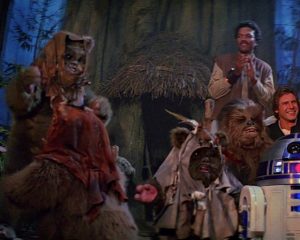 „First of all you had fleecy pyjamas, like a tracksuit then you had foam padding then you had your first suit over the top of that so it was really hot. And because it was filmed at the top of the studios up in the trees, between each shot they had to take the heads off and blow the hairdryers on cold and give us glucose sweets.“ – told the actress.

Even though the filming was quite difficult, Pamela was happy to work with some Hollywood greats. She remembers not getting to connect with Harrison Ford, however, Mark Hammil was another story. They both got along quite well as they both had kids of the same age and had some stories to tell.

After „Return of the Jedi“ Pamela Betts did not continue with her acting career but always remembers old acting job and is lookign forward for upcoming movies. „Being part of it all is something I am very proud of“.