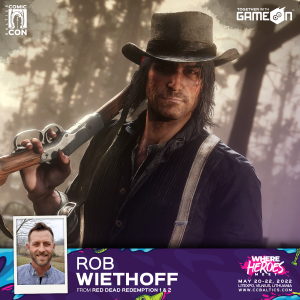 Rob Wiethoff is a voice actor best known for his role in the cult Red Dead Redemption series.

While studying, Wiethoff moved to Los Angeles, where he received many promises that he could be assigned roles in films.

For this reason, he moved to this city, but all the promises made about the roles in the films were never true, and Wiethoff was left to work as a bartender. He didn’t get much work in acting, except for a few minor roles in small films and TV commercials.

In December,  2008, his agent called him and told him that Rob had the opportunity to participate in the selection of an “untitled video game project.”

He finished the selection feeling frustrated that he wasn’t going to get the role. But a few days later, he received word that he had won the role, and filming began in January, 2009. The project was eventually named Red Dead Redemption, developed by Rockstar San Diego and released by Rockstar Games.

For this game, Wiethoff provided the recording of the voice and movement of the main character John Marston.