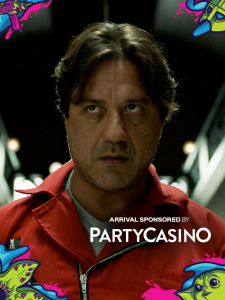 E. Arce is a famous Spanish actor whose career dates back to the 2000s. While studying law at the university, E. Arce realized that this professional field was not for him. Significant changes took place after the actor won the popular Spanish show “Ellos i Elles”. E. Arce dedicated the money of the prize he won to study at the American Academy of Dramatic Arts.

Later on, the actor developed his career in Spain and abroad. Arce’s most famous projects include roles in the historical fiction series “Knightfall”, the movie “A Long Way Down”, and the world-famous TV series “Money Heist”.

The actor appeared in all seasons of the series “Money Heist”, which is probably one of the most famous projects filmed in Spain. His character Arturo Román is the brightest hostage character in the story and sure is memorable for every fan of the series.

In 2017, the series “Money Heist”, originally titled “La casa de papel” in Spanish, appeared on the Spanish television channel “Antena 3”. According to the director’s original idea, “Money Heist” was planned to be a short TV project consisting of 15 series.

At the end of 2017, the series was acquired by “Netflix” and the original episodes were divided into 22 shorter scenes, giving it a new name – “Money Heist”. Today, the series has been running for five seasons, and E. Arce, who arrives in Lithuania, has played in each of them.