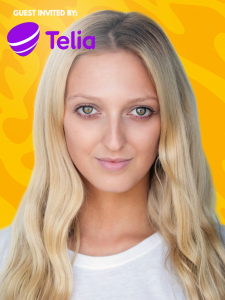 GEORGIA HIRST is a British actress known for one of the leading roles in the “History Channel’s” TV series “Vikings” and the horror movie “Ravers”.

In the TV series “Vikings” G. Hirst embodied a bold and sometimes even reckless character, who was undoubtedly one of the fan favorites throughout the series. As a strong fighter Torvi character could be seen from season two until the end of the series.

However, Torvi’s role in the “Vikings” is not the only one Georgia Hirst has ever played. Actress is also known for one of the leading roles in the 2018 horror movie called “Ravers”.

Actress has been invited to Lithuania by “Telia”, after seeing how popular “Vikings” are on company’s smart TV platform “Movie Club”.

Graduate of the prestigious “Drama Centre”

G. Hirst is a talented and charismatic actress who has studied acting at the prestigious, top-notch acting school the “Drama Centre”, at the London University of Arts. The “Drama Centre” alumni list includes such famous actors like Tom Hardy, Pierce Brosnan, Russel Brand, Paul Bettany and many other well-known names.

Meanwhile, actress is not the only famous person in her family. Her sister Maude Hirst is a well-known actress, also seen on the “Vikings” as a character Helga. Meanwhile, their father Michael Hirst, is the main author and creator of the series.

Get to know Georgia Hirst at COMIC CON BALTICS 2019

Meet the actress Georgia Hirst, chat, take a picture together or even get her autograph fans will be able on September 21-22 during the popular cultural event “Comic Con Baltics 2019“.