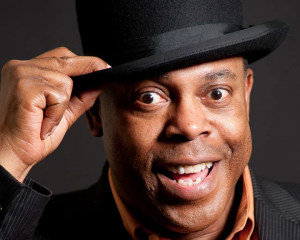 Known as the “man of 10,000 sound effects”, Michael Winslow solidified himself as a pop culture icon when he played the hilariously mischievous Larvelle Jones in the Police Academy franchise. Michael’s unique, wacky brand of comedy alongside his unparalleled gift as a voicetramentalist is what makes him so well loved around the world.

A respected comedian and actor of both television and film, Michael is also a staple in other realms of entertainment such as voiceovers and stand-up comedy. This versatility has enabled him to travel from country to country leaving audiences breathless from laughing and astonished by his superhuman sound making talent.

While Michael’s claim to fame is largely associated with the nostalgia of 1980s lore, he has kept busy in the film industry by starring in such films as Sharknado, Lavalantula, and Killing Hasselhoff. Currently Michael is focused on creating music which comes as no surprise for one of the most prominent innovators of beat boxing.

Recently Michael has collaborated on projects with Run the Jewels, Jon Anderson of Yes, and Grammy award winner Victor Wooten. These collaborations with other artists are a fine indication of the musical playground that Michael’s upcoming record will sound like when it’s released in 2018.