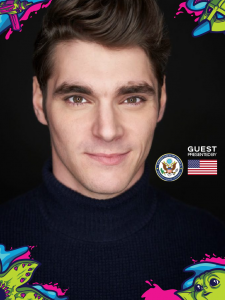 RJ Mitte is a US-born actor best known for Walter White Jr.’s role in one of the best rated American TV series of all time “Breaking Bad”.

The actor made his debut in the series when he was still a teenager, so according to actor, being able to work with well-known actors was a huge challenge. The actor shared the scene with such Hollywood megastars as Bryan Cranston, Aaron Paul, Anna Gunn, Bob Odenkirk, Krysten Ritter and many more.

Created for five years and counting the same number of seasons, “Breaking Bad” is considered one of the best series of all time. This show currently ranks fourth on the IMDB film platform. The series has won two Golden Globes and as many as 12 Emmy’s.

Both on the television screen and in real life, RJ Mitte and the character he embodies are struggling with a severe physical disability – cerebral palsy leading to a disorder of motor skills.

Accordingly, it is particularly important for RJ Mitte, as an opinion leader, to inspire people with disabilities to integrate into society and to pursue their goals with courage. According to Sarah V. Stealy, a representative of the US Embassy in Lithuania, who finances the actor’s arrival in Lithuania, RJ Mitte is committed to ensuring that people facing a similar fate do not feel discriminated against in society.