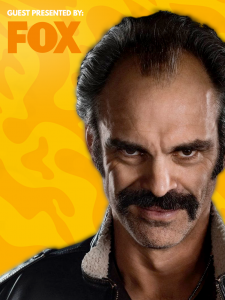 such as “The Walking Dead” and “Westworld”, and, for perhaps the most successful video game of all time – “Grand Theft Auto V” (“GTA V”).

Guest of the “Comic Con Baltics 2019”, S. Ogg has been in the film industry for more than two decades. During this period, he played over half a hundred characters in different TV series, movies, video games, commercials and plays, and made hundreds of thousands of fans around the world.

Actor’s career and most significant roles

Steven Ogg had an interest in acting since he was a child. Back then he signed up for acting lessons in his hometown of Calgary, Canada. Later, as a teenager he became interested in sports ant started working on a professional volleyball career. However, after serious injuries, Ogg was forced to give up his volleyball career and that was the moment when we remembered his old passion for acting.

After some time traveling and living in Vancouver, Toronto, Milan, London, Paris, Ogg settled in New York City, where he had his debut in cinema – in the romantic comedy called “Giving it Up”, which was released in 1999. Later, actor appeared in many popular US television series such as “Law & Order”, “Better Call Saul”, “Third Watch”, “Person of Interest”, “The Tick” and others.

However, most of S. Ogg’s recognition came from the role of Trevor Phillips in the famous video game “Grand Theft Auto V”, also – from Simon’s character in HBO’s “The Walking Dead” and from Rebus role in “Westworld”.

In 2014 actor had received a prestigious award from the “New York Videogame Critics Circle Awards” for the Best Overall Acting in a video game. What is more, due to Trevor Phillips character, Ogg was also nominated twice for the Best Voice Actor in the video game category.

Get to know him at COMIC CON BALTICS in 2019

Fans will be able to meet Steven Ogg, as well as, to talk, take pictures and even get his autograph on September 21-22 during the pop-culture event “Comic Con Baltics 2019”, in Vilnius.