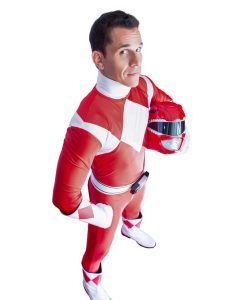 series (eventually the Gold Ranger), and he later became the Blue Ranger for Power Rangers Zeo. According to Steve, the role has changed his career daring him to Fanzz for almost 25 years but the actor is very grateful for that. Steve is also a martial artist.

“Power Rangers” franchise has continued, and as of 2017 the show consists of 24 television seasons of 20 different themed series and three theatrical films released in 1995, 1997 and 2017.

Steve is convinced that the multi-layered content of the show is the key reason for its worldwide success. “The reason it’s lasted as long as it has is that it has so many elements. Karate, Cool teenagers, rock music, aliens, monsters, robots, explosions, bright colours, flips, kicking and always giving kids a good positive message at the end”, – says Cardenas. Steve is also an American martial artist which reciprocally made it easier to do his own stunts during the show. He is very excited to come to Lithuania and share his experience of both being part of the historical TV show as well as share knowledge of the martial art disciplines.