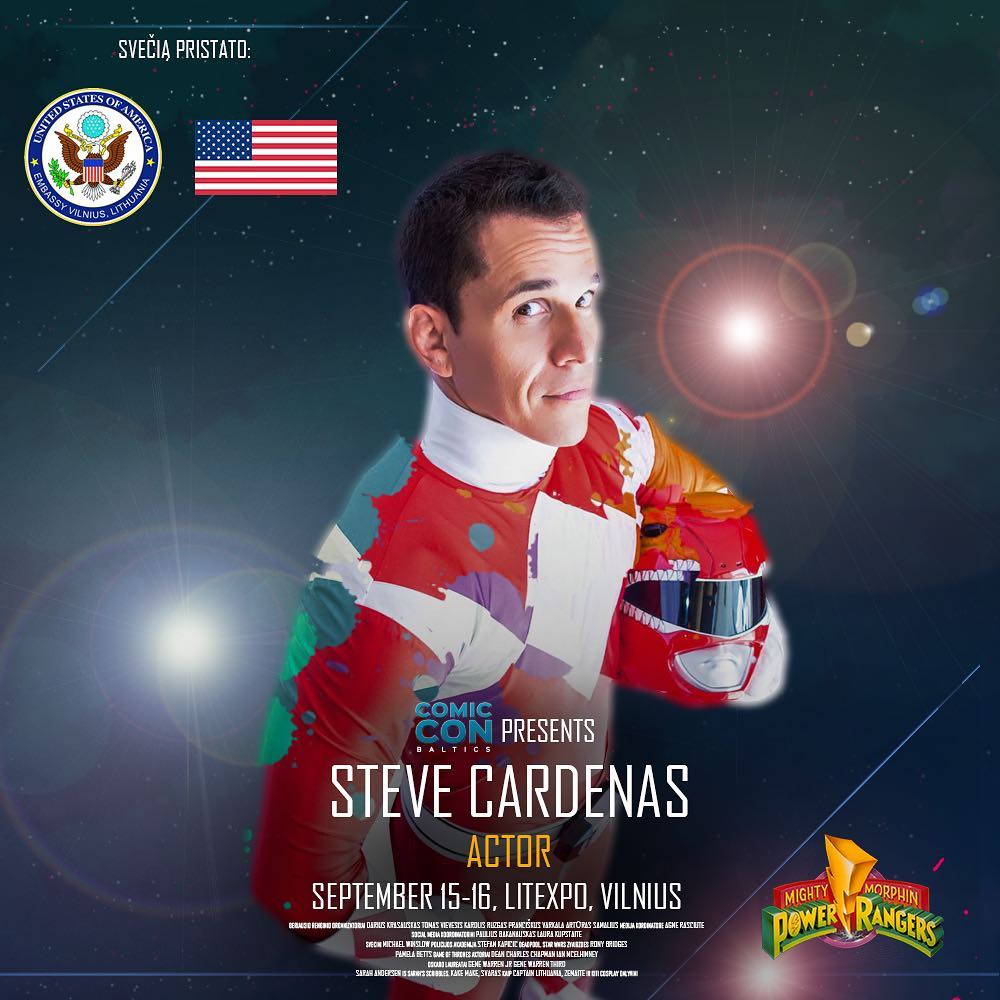 The legend of “Power Rangers” comes to Lithuania

Lithuanian fans of the one of the most iconic TV series in US “Power Rangers” should be excited because this September they will have a chance to meet one of the original rangers – actor Steve Cardenas.

He played the red ranger DeSantos. According to Steve, this role shifted his career and personal life. “It’s in dared me to Fanzz for almost 25 years and I’m very grateful for that“, – says Steve.

The saga of “Power Rangers” has lasted for 25 seasons and made a huge impact on the development of fantasy genre both in TV and film. The colourful rangers’ costumes, iconic fight scenes and unconventional dialogues made this franchise stand out from other shows. The saga has been broadcasted in more than 40 countries including in Lithuania. In some countries, you can still watch it.

Steve is convinced that the multi-layered content of the show is the key reason for its worldwide success. “The reason it’s lasted as long as it has is that it has so many elements. Karate, Cool teenagers, rock music, aliens, monsters, robots, explosions, bright colours, flips, kicking and always giving kids a good positive message at the end”, – says Cardenas. Steve is also an American martial artist which reciprocally made it easier to do his own stunts during the show. He is very excited to come to Lithuania and share his experience of both being part of the historical TV show as well as share knowledge of the martial art disciplines.

“The visit of Michale Winslow in last year’s “Comic Con Baltics” showed that the audience is excited to meet their childhood heroes. Steve Cardenas partook in one of the cult shows that influenced pop culture around the world. We are delighted that we will provide an opportunity for “Power Rangers” fans to meet one of the rangers eye-to-eye and ask the burning questions”, – says one of the organisers of “Comic Con Baltics” Darius Krasauskas.

Despite being inspired by a Japanese show, “Power Rangers” instantly became a reflection of US pop culture. The popularity of the show obliged its creators to turn attention to social problems, consequently, the rangers fought against not only witches, robots and devils but also social injustice. Trying to shine a light on the many sides of US pop culture US embassy in Lithuania has contributed funding to Steve Cardenas arrival to Lithuania.

The organisers of “Comic Con Baltics” have already announced that Janeshia Adams-Ginyard – the rising professional of stunts, the star of “Flash” and “Vampire Diaries” Rick Cosnett, as well as the father of “The Awkward Yeti” Nick Seluk are coming to the event. More stars and film project will be announced in the near future.