Dean-Charles Chapman, that is coming to Lithuania on 2-3 December, the sweet king from “Game of Thrones” whose days are already counted. The young actor started his career in West End theatre playing Billy Elliot in the musical. He has already starred in fourteen projects. Some of his older colleagues might envy such a good start.

Dean started his acting career being 10 years old. One of his famous roles is Tommen Baratheon in “Game of Thrones. At first, the actor played another character in this show: “I did not expect that Tommen will be brought back to the show, especially that his role will be suggested for me. Already in 2012, I played Martin Lannister throughout season three. After six months screenwriter, David Benioff called me and invited me back to the show to play the young king. Funnily, I honestly knew nothing about Tommen because I haven‘t watched the show, even when I starred in it. Of course, I had to re-watch everything from the start and I loved it! I am very thankful for the team of “Game of Thrones” for the opportunity they gave me. 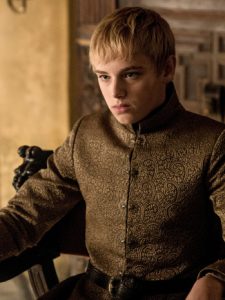 While talking about the specific end of his character’s story D. C. Chapman says that to his mind, the end was right. “I think Tommen died in the most suitable way possible. He did not deserve to be brutally killed, which is so casual in this show. Tommens’ acceptance of his defeat was fun. To be honest, we, together with the show creators, spent several days coming with the best way for him to fall” – says D. C. Champman. “We have tried the accidental slip or siting on the edge and then sliding down. Still, the best way seemed to just fall head down” – recalls the actor.

Role in the “Game of Thrones” became a trampoline to his acting success. Already in 2014 Chapman starred in “Before I Go to Sleep” together with Nicole Kidman, Collin Firth and Mark Strong. In the coming year, you will see him in “Commuter” alongside Liam Neeson.

“I love “James Bond”, especially the one played by Pierce Brosnan in the “Golden Eye”. Sadly, at this moment I couldn‘t play the secret agent myself, because, simply, my beard hasn‘t started growing yet. I hope that in a long run I will solve this problem” – laughs Chapman.

You will have a chance to meet this young British actor! Already, on December 2-3 in the first-ever popular culture event “Comic Con Baltics” in Lithuania. Get your tickets at www.tiketa.lt.