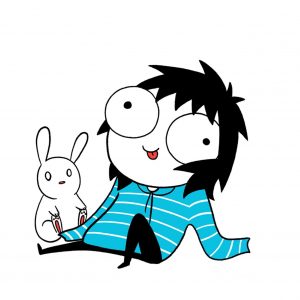 Sarah Anderson was born and raised in the United States of America. She graduated from Maryland Institute College of Art with a BFA in illustration in 2014. She began her webcomic Sarah’s Scribbles while a sophomore there, in 2011.

S. Andersen comics tells a story about a messy-hair girl Sarah. She is always on a daily adventures, battling social anxiety, body image and laziness.  The author has deriberately chosen not to post pictures of herself instead opting to present herself through dark-haired and black-eyed character.

S. Andersen says that her comics are semi-biographical. „All the adventures are about myself, my friends and beloved animals“. According to the author, finding a story is not always easy and sometimes it takes from one hour to days to figure out what to draw. However, people tend to personalize with my comics that is why I am not calling her Sarah in the strips“, – says the author.

New York based author will come to Vilnius to meet all her fans. She started creating her webcomics in 2011. Sarah started her path in social media platforms and she now has a huge fanbase. In Facebook she now has 2,3 million followers and in Instagram – almost 2 million. However, her works are published not just online. She already published two books – “Adulthood is a Myth” and “Big Mushy Happy Lump”.

25 year old artist this year had her own panel in San Diego “Comic-Con” and she is constantly travelling around the world, meeting her fans and signing her books. And finally, this December she will come to Vilnius, where she will meet everyone in “Comic Con Baltics”.

Don’t miss your chance to get the cheappest tickets to the event because they are selling fast! Soon, on 5th Semptember, the prices will go up. Get your tickets here at  www.tiketa.lt