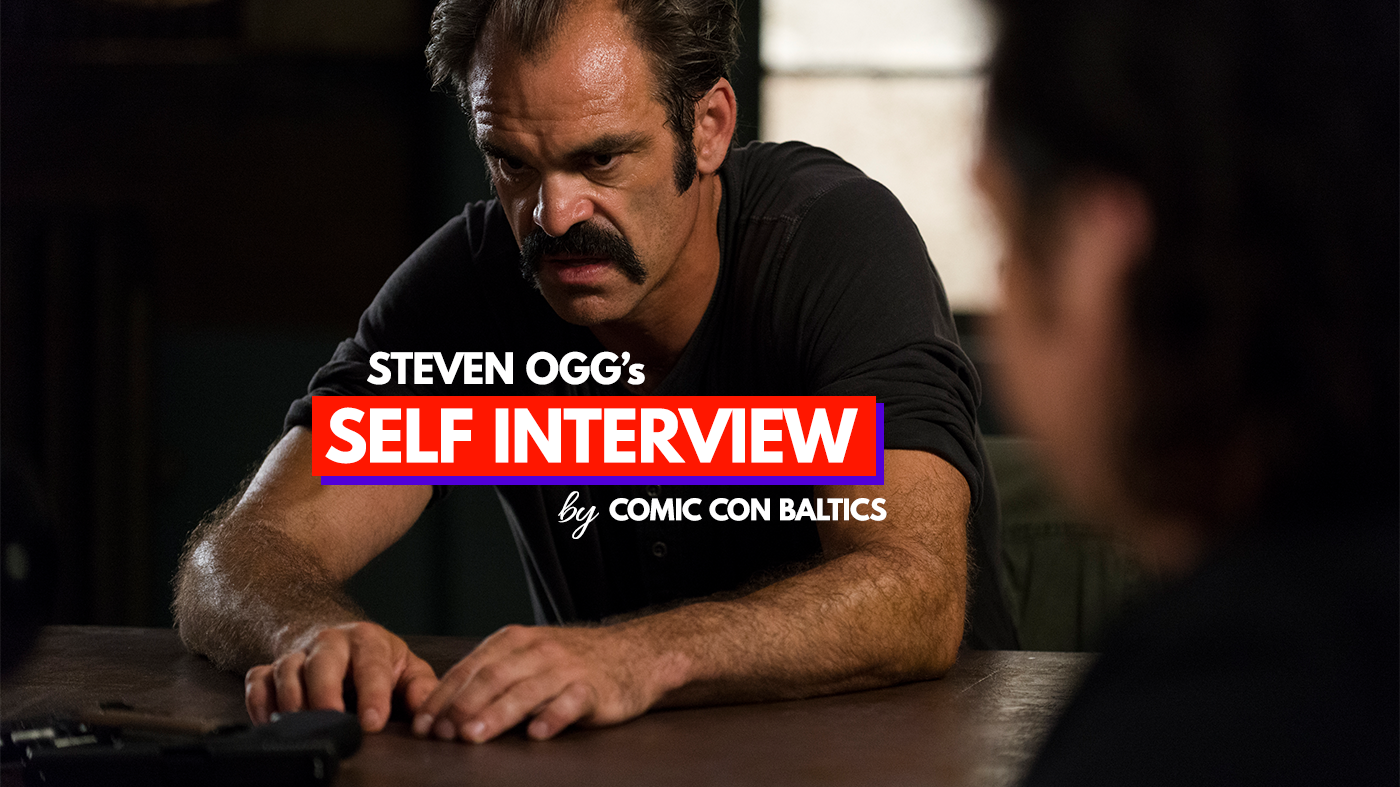 ﻿Special interview with actor Steven Ogg: “I have no idea what to expect, which is always an exciting thing”

This weekend, on 21-22 of September, the fans of “The Walking Dead”, “Westworld” and “Grand Theft Auto V” (“GTA V”) will have an exclusive chance to meet Steven Ogg, the legendary American actor in Vilnius, Lithuania. Star from famous TV series, movies and video games will be visiting the annual popular culture event “Comic Con Baltics 2019”. His appearance in the Baltics is presented by “FOX”.

Before his arrival, the actor agreed to do an early interview where he shares some of the most important moments of his career. Also – his hobbies, plans for the future and thoughts about visiting Lithuania.

What was the starting point of your career as an actor? How did you decide that you want to take this path and what was your first acting job?

I guess, the starting point was in elementary school, where I performed as Betty Boop. No idea why, but that was where it all started. The ability to entertain was appealing to me and while I was growing in Alberta, I did the National Film Board and theater thing. I enjoyed performing, as I still do.

First acting job was also at the National Film Board when I was 10, or 11. And then I did theater, so those would be my first acting gigs.

What was the most challenging project you have ever participated in? Why is it different from the others?

You get into a project because it is challenging… Hopefully. And I guess if there is one that differs from the others, it is “Solis”, the space film that I did. I loved it! It was just me and it was me number one on the call sheet and the only one on the call sheet. Well, yes there were several more voices eventually, the actors who helped with reading the other voices. That was a challenge, but a great challenge – I loved it!

Again, it is like choosing a favorite pet, or a favorite child – you don’t really have a favorite. Simon and Rebus, they were both fun, because I didn’t really know where they were going, so they became unpredictable due to the nature of not knowing where the script leads, or what’s my next part in the next script. So, I was trying to portray these characters with as many layers as possible to allow the writers to decide – whether he can be funny, or he can be just creepy or he is this or that, or can he be dangerous. They were both great! “The Walking Dead” and “Westworld”, are both very large worlds with a hell of a lot of people in them, and both projects were extremely fun. So, no favorite here. You can’t choose favorites.

When talking about your most significant roles, we could not leave behind the legendary video game “GTA V”. Have you tried to play it yourself? Do you enjoy video games in general?

Nope. No video games at all. I don’t play them, never really have – not my thing. I think I did “Pacman”. No, actually, you know there is one – “The Hogger”. One of those arcades that had all the old games. But again, I think I played it once in the past twenty years. That is probably enough. Video games – not my thing.

When talking about “Grand Theft Auto”, I knew it was going to be a video game, but it was more about the cartoon version of me through motion capture, so that is why I was excited. Not because it was a video game. I thought: ‘hey, cool. I would get to be a cartoon character!’. That’s awesome!

We all know you for your award-winning voice, great acting skills and amazing villain characters that you have portrayed. However, what are your hobbies that you love to do when you are not on the movie set?

Right now, beside me, I have a book “The Bells of Old Tokyo: Travels in Japanese Time”. So, reading – I love to read. Read, read, more read. Every day I could get a new book. I love it. Also, cycling. Used to run a lot. Running was a hobby. I would go for the epic runs – hour, two hours, but knee injury, toe, two surgeries this year slammed my world, literally. So, now I am cycling a lot. Also, visiting museums, and art galleries. And music. Those are all hobbies.

Yes, I am heading back to shoot, which I am really excited about. Season 2 of the “Snowpercier” will be going to production momentarily, actually. Soon after this. We have done season 1, which is in the can, and it doesn’t premiere until 2020. TV series, based on the movie which is of course based on the graphic novel and it has just a wonderful group of people, so I can’t wait to be back in my home country of Canada to be filming this. Also, “Short History of the Long Road” is a film, that is now on the festival tours. And, man, as far as for my other future projects, I just love to go project to project and do some theater, and small films and just those are the things that really interest me, and the things that I really am grateful for.

Fans will be able to meet you this Saturday and Sunday in Vilnius. Maybe you would like to say something to them before you see them in person?

I can’t wait! Old town – I must check that out! I can’t wait to be there! A town that I have never been to. How fantastic is that? Get to do a little bit of exploration. I look forward to meeting everyone there and I have no idea what to expect, which is always an exciting thing. You just get to go somewhere you have never been and just be open heart, open mind, open soul, right? Let’s have some fun!

Fans will be able to meet Steven Ogg this weekend on 21-22 of September, during “Comic Con Baltics 2019” at “Litexpo” in Vilnius. “Comic Con Baltics” is a third-year event, which attracts more than 20 thousand visitors during one weekend and is the biggest event of its kind in the Baltics.

Tickets are distributed by TIKETA.